What is the difference between the Hydrating Gel Plus HS and "classic" moisturizers?

Learn in this article what is the difference between the Hydrating Gel Plus HS  and “classic” moisturizers in terms of formulations and hydration power. 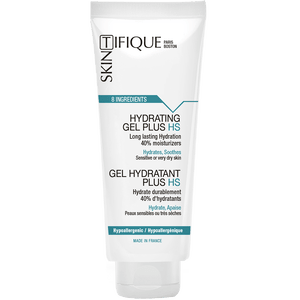 There are in the market a lot of different moisturizers, all claiming to provide good hydration. One can find it hard to make a choice! It is important to pay attention to the products’ formulation.

First generation moisturizers are very established moisturizers. They have been on the market for quite a long time and they use petrol-derived ingredients as “emollients” to soften or soothe the skin. These ingredients are for instance:

These petrol-derivated ingredients create a thin layer on the skin (like a liquid plastic glove) which limits the evaporation of the water contained in the skin, therefore the efficient moisturizing effect. But this use of petrol-derived ingredients causes two type of problems:

The difference with  first generation moisturizers is that companies have kept these emollients but usually decreased their quantity. They have often added another type of occlusive emollient: dimethicone or similar derivatives of silicones (which are also derived from petrol). This emollient also provides an occlusive layer on top of the skin.

They have also added other types of moisturizing ingredients, such as glycerin, that are called “humectant”and that act in a different way than emollients. Indeed, they attract water to the skin. Most products, however, cannot contain large quantities of glycerin, because if the quantities are too high, the skin becomes sticky and it creates an itching sensation, as too much water from the lower layers of the skin is attracted to the higher layers.

Skintifique Hydrating Gel Plus HS: the new generation of moisturizers

The Hydrating Gel Plus HS can be called “a new generation of moisturizer” mainly because of two things:

As you can see, Skintifique is bringing innovation both on the safety and the efficiency side!

Why may you want to use the Hydrating Gel Plus HS to moisturize your skin?

So now, you know what is the difference between the Hydrating Gel Plus HS  and “classic” moisturizers. The Hydrating Gel appears as a new generation of moisturizer. It contains no occlusive ingredients derived from petrol, which is better both for the skin and for the environment. It also delivers superior moisturizing efficacy with a great texture, thanks to a long-term delivery of the moisturizing ingredients, mostly glycerin, which are in high quantities.

✉ 10% off your first order by subscribing to our newsletter